Filming of Season Four of Downton Abbey is done and the show is about to premiere in the U.K.  Woohooo!!!    But, the cast must be bored with nothing to do.  Not so much for Allen Leech, who plays the former chauffeur, now estate manager/son-in-law, Tom Branson, on Downton Abbey.  He has just signed on for his first major Hollywood production in The Imitation Game which starts shooting next month. 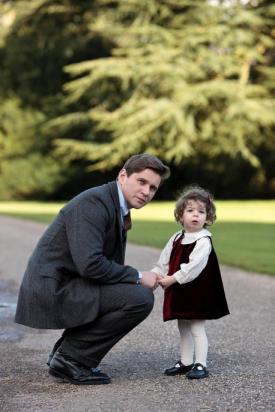 Benedict Cumberbatch and Keira Knightly are staring in the film about the famous Enigma code breaker Alan Turing.  No word yet on what role Allen Leech will be playing.

Cumberbatch will be playing Alan Turing and Knightly will be playing Joan Clarke, Turing’s co-worker in Hut 8 at Bletchley Park, a good friend to whom he proposed marriage in 1941 despite being his being gay.  Turing later decided he could not go through with the marriage and the pair remained good friends until his death.

Turing was a mathematician and is famed for writing the first blueprint for modern computing. He also invented an electromagnetic machine called the ‘bombe’ which formed the basis for deciphering Germany’s Enigma codes during the war.

The work Turing and his team did at Bletchley Park has been credited with shortening World War II by as many as two years, but it is only six decades after his death that Turing’s contribution is beginning to be fully acknowledged .

Because of the Official Secrets Act, his code-breaking did not become public knowledge until twenty years after his suicide. His parents and brother never knew of his secret war efforts during his lifetime

Turing was found dead on 7 June 1954, a few weeks before his 42nd birthday, having apparently bitten into an apple laced with cyanide.

His death came soon after he was found guilty of gross indecency for homosexual acts (which were then illegal) avoiding prison by agreeing to be chemically castrated.

Despite his premature death aged 41, Turing was so prolific in the fields of mathematics, computer science and mathematical biology, specifically morphogenesis, that the Science Museum dedicated a whole exhibition to him upon the centenary of his birth last year.

The Imitation Game is an indie film being produced by Teddy Schwarzman with Nora Grossman and Ido Ostrowsky of Amersand Pictures.  Rumor has it that the budget is around $15 million.