Sam Heughan is cast as our beloved James Alexander Malcolm MacKenzie Fraser in the upcoming STARZ drama Outlander.  Sam is a performer on stage, screen and film and a graduate of the Royal Scottish Academy of Music and Drama.  (And pretty cute, if I do say so myself.)
“From the very beginning, I knew the part of Jamie Fraser would be difficult …to cast,” said Executive Producer Ronald D. Moore.  “I had no one in mind for the part.  I knew that someone would just come into the audition and be Jamie Fraser.  And that’s what Sam did.”
“Oh. My. God. That man is a Scot to the bone and Jamie Fraser to the heart.” – Diana Gabaldon exclaimed. 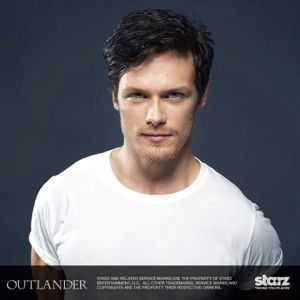 I am UTTERLY delighted to be able to tell you that Sam Heughan is officially _confirmed_ as Jamie Fraser, for the new Starz cable-TV series!”
Official press release/photo will be along shortly, I’m told.  Meanwhile, I asked Sam how to pronounce his last name–just for starters <g>, to which he replied:
“HEW-an is goo…d or if you can, insert the Scottish throat clearing/spitting sound in the middle… HewCH-an. Hard to get right first time without spraying close friends with saliva.”
(For those of you wondering whether he can say “Sassenach” properly)

Congratulations, Sam!!!  We are looking forward to seeing Our Jamie come alive.

Now, let’s see who gets cast as Claire???  The pressure is on to get this right Ronald D. Moore.